When you want to know even more

Here are some text written by Stefan Björklund who came interested in the orto acoustic sound in the late 1990’s and today is guiding Larsen with technical advices.

Why are Larsen 2 ½-way speakers and how do they work?

Larsen 8 and Larsen 9, 2½-way floorstanding loudspeakers that are not really 2½-way the way you would think…

“Free-space box speakers are omni in the bass but switch to essentially half-space directivity at what is called the “baffle step” frequency, where the wavelength of the sound gets down to something along the lines of the width of the speaker. This involves a change of directivity of an emphatic sort—from omni to half-space radiation. With the popular narrow-front floorstanders of today, this transition occurs somewhere from 500–1000Hz, an unfortunate location for an abrupt change in radiation pattern. People seems to have decided to ignore this or at best to make the transition as gradual as possible, but this does not make it cease to exist.”

A traditional loudspeaker placed in the room away from surfaces like the back and side walls will exhibit this baffle step drop in SPL at 500-1000 Hz. The drop is theoretically 6dB. The way to cope with this in such a speaker is to control the radiated SPL in the crossover in such a way that you attenuate the sound above the baffle step frequency to match the SPL below. This essentially lowers the sensitivity and output SPL of the loudspeaker.
One other way of addressing the problem is to add one more driver connected in parallel with the first bass driver and a crossover design that gradually lets this extra driver fill in the missing 6 dB. Drivers connected in parallel will draw twice the power from the amplifier in this region. A 2½-way system. The actual change of directivity is still there in both cases even when it is masked by the change in output SPL to make it not obvious…

All Larsen loudspeakers are free of this baffle step because of the wall placement.

The close proximity to the back wall essentially makes it equal to having the driver mounted in the wall with an infinite baffle, hence no “baffle width” that has a corresponding baffle step drop frequency.

So why is there Larsen 2 ½-way speakers and how do they work?

The history behind this is that “someone” in the Larsen design team was using his Larsen 6 together with a potent array of subwoofers and this “someone” asked Anders Ericsson if could make a bigger Larsen with “more” bass. A speaker with a high-quality power response in the lower frequency regions even at really high SPL.

The Larsen 6 has a linear frequency response down to well below 30 Hz! But if you start to play really loud there will be a compression of the response below let’s say 80 Hz compared to subwoofers with 12” drivers. Anders got back to the drawing board together with John and the result was almost a surprise to us all…

The new Larsen 8 was not a Larsen 6 with a subwoofer… It was so much more! It had rich, deep and precise bass with very low distortion all the way down to below 25 Hz.

A very natural sounding body in the bass region

So if the Larsen Loudspeaker provide half-space directivity already in the bass and no baffle step how is the 2 ½-way idea implemented and what does it do? In the Larsen 8 (as well as the Larsen 9) the main drivers are located at the top of the speaker is diagonally mounted directed upwards and inwards the same way as in the Larsen 6. Located at the floor on the side of the loudspeaker there is a second driver identical to the main one.

There is no need to design the crossover for this driver to match the non-existing baffle step from a specific baffle width / frequency. Instead the crossover point is set around 300 Hz. The reason for this frequency is to minimize the loudspeakers (all loudspeakers) problem with the reflex from the floor in between the loudspeaker and the listener. If it would be only to address compression and distortion it would probably be fine with a 100 Hz or so crossover frequency. In a traditional loudspeaker the extra woofer would add the missing 6 dB of SPL by both drivers playing the same sound (in that frequency range) twice as loud together. In the Larsen 8 (and 9) the drivers instead share the work load, both drivers playing half the SPL each.

The benefits are lower distortion (half the cone movement for same loudspeaker SPL), more uniform bass in the room due to double the points of radiation of sound, better coupling to the air while radiating bass sound due to twice the cone area, suppression of reflex from the floor. All together creating the signature natural sounding rich, deep bass found in the Larsen 8 and Larsen 9. 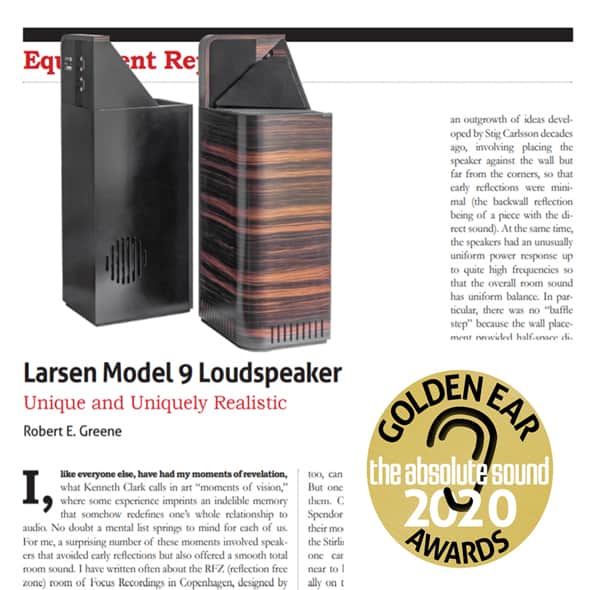