Surface reflected sound from boundary surfaces is a part of the recording and listening process. They cannot and should not be avoided, because this reflected sound adds timbre and fullness to the instruments and voices of the musicians.
Conventional speakers are designed for, and tested in, an anechoic chamber. Meaning an echo-free room with absorbent material on all surfaces, a room without sound reflections. Which is why conventional speakers sound dull, lacking richness and color, in a “normal” room, thus creating a huge discrepancy between stated and real performance.
Larsen speakers are designed and constructed to thrive and perform phenomenally in a “normal” room by using the surface sound reflections to its advantage and thereby enriching the listening experience, instead of degrading it.
Larsen speakers are designed to stand flush against the wall, using the wall to create a deep and full bass from a relatively small cabinet. This placement, combined with the unique positioning and angle of the drivers, flanked by absorption material, virtually eliminates the wall behind the speakers, thus eliminating early sound reflections from interfering with the initial direct sound from the speaker.
John Larsen, the designer behind the Larsen speaker, worked with Stig Carlsson for sixteen years until Stig Carlsson’s death in 1997.
Stig Carlsson was the inventor of the unique acoustic design principle, which is used in the Larsen speakers. A patented design developed by Mr. Carlsson when he created speakers for Sonab in the sixties, resulting in the Sonab OA – 4, 5 and 6. In the seventies, he created the legendary Sonab OA -12, 14, 116 and 2212. Roy Allison and Peter Snell worked on similar ideas, trying to create speakers that could incorporate the effects surface reflections had on the sound quality of the speakers. In 1980, Mr. Carlsson created his own speaker line, Carlsson Ortho-Acoustic, once again, improving on the design of the Sonab speakers, creating such fantastic models as the Carlsson OA – 50, 51 and 52 that were produced until 2006.
John Larsen’s own brand, Larsen, applies the principles invented by Mr. Carlsson and has improved upon these innovative design principles once more, culminated in the creation of the Larsen 8.
The Larsen speaker is a genuine Swedish product, made by Larsen HiFi in Skillingaryd, Sweden, with help from local suppliers. The loudspeaker designer Anders Eriksson has designed and improved the electro acoustic part and John Larsen created the external design.

Loudspeakers can have various basic radiation patterns: omni, dipoles, or the conventional forward-firing box speaker designed to be placed away from all the walls in the room. The radiation of sound essentially means that any sound wave is typically omni in the bass, shifts to radiating primarily forward in the upper bass/lower mid-range and then narrows its radiation more and more as the frequency increases.

The reason why conventional forward firing speakers needs to be placed away from the wall is because that is the easiest way to avoid coloration of the mid-range from surrounding walls. Historically this traditional thinking created the forward firing speaker as a norm, but this norm created many different problems for the listener, one of which is that the bass response then becomes more unpredictable and it still does not eliminate colorations from surrounding walls.

But the early reflected sound off the back and side walls – from that part of the speaker’s sound radiates wide (a lot in the bass and less as the frequency increases), arrives at the listening position very early, unless someone places the speakers a huge distance from any surrounding walls.
Early first reflections from surrounding walls will be interpreted as distortion by the brain, because it arrives so fast after the direct sound from the speakers, that the brain can’t differentiate between the direct sound and the early first reflected sound, thus the brain concludes the early reflected sound as distortion.

Larsen ortho acoustic speakers are based on a systematic rethinking of how speakers interact with the room, and the listener, at the listening position, and how sound ought to radiate into the room. To create a speaker that works when placed against the wall is advantageous not only for the bass, but also for ideal and natural sound and music reproduction. 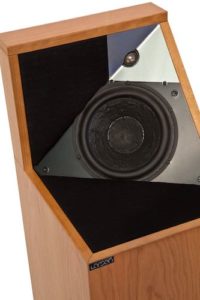 Placing a conventional speaker against the wall does not work. But the Larsen ortho acoustic speakers’ angled drivers, the surrounding absorption material and the unique crossover, that was created after decades of research and development, means that the Larsen speaker now effectively works with any given room, instead of against it, unlike most conventional speakers that are designed to perform ideally in anechoic chambers (dampened rooms without reflections). Anechoic sound reproduction (the theory behind most conventional speakers’ reproduction) sound very odd, unnatural and unconvincing. Over evolution the human brain has learned that echoes and reflections exist in any room, so testing and developing speakers in anechoic chambers is far removed from real world listening.

The Larsen ortho acoustic speakers eliminate the back-wall reflection by placing the speaker against the wall and having the correct amount of absorption material around the drivers so that the sound formed off the wall, in effect a unit with the forward sound. The angle of the drivers, firing upwards and inwards, also eliminates the typically dreaded first reflection from the side wall. Add Larsen’s unique matched crossover and you have Larsen ortho acoustic speakers that performs perfectly when placed against the wall and work with the room, not against it. Consequently, the late reflected room sound then arrives much later, just like it does at a good concert hall.

The final aspect is that the directivity of any speaker should, in theory, remain essentially constant. The up-against-the-wall placement eliminates the baffle step (omni-to-forward) shift in directivity since the speaker is forward radiating all the way down. In order to achieve constant directivity, the Larsen speaker has a much wider treble dispersion, which is the effect of the actual tweeter used, the angle of the tweeter and the surrounding metal plate with creates a wide tweeter dispersion into the room.

This constant directivity design in the Larsen ortho acoustic speakers, with drivers and tweeters not firing directly at the listener, fills in the power response in the high frequencies, where most speakers become quite directional. Thus, the whole listening room becomes filled with music like at a great concert hall, with all the frequencies radiating in the same manner and where all early distorting reflexes are eliminated, resulting in a very natural music reproduction.

Another advantage of the Larsen speaker’s placement and driver configuration means that the normal narrow “sweet spot” of listening – where a listener is forced to sit dead center to hear stereo – is eliminated. The Larsen speakers fills the whole room with music. If a person sits to the left of the normal center sweet spot, then the person is closer in distance to the left speaker, but they are now also in the direct path of the direction of the drivers from the right speaker.
Thus, the Larsen speakers essentially corrects the soundstage to fit to wherever the listener might be sitting in the room, essentially making the whole space between the 2 speakers one giant sweet spot.